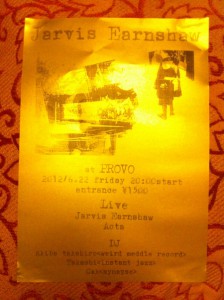 Gak(synapse)
Jarvis Jun Earnshaw
Designer, Musician, Painter and Photographer Born in London 1982, he spent most of his childhood in Japan, graduated from Bunka Gakuin Art School and is a recent graduate of the Pratt Institute. His musical career as well as his Art career has been recognized worldwide, having solo exhibitions from Japan to New York, performing at Fuji Rock Festival, Gotou Planetarium, etc. and is now based in Brooklyn, New York. His work is often described as a cinematic experience, provoking memories of past and beyond, warm and rich as does the noise from a record needle touching an LP; at times violently explosive yet soothing and irresistible. nowhere_now here.
jarvisearnshaw.com/
toqsyold.blogspot.com/
www.myspace.com/jarvisearnshaw